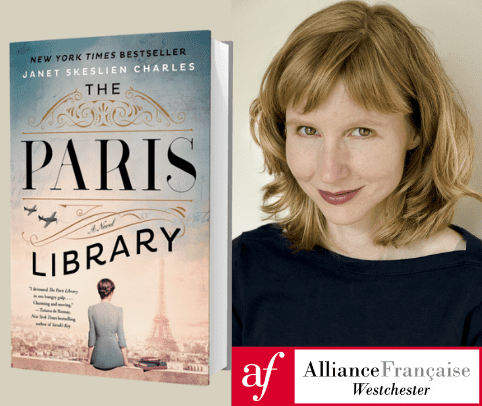 A word from Janet Skeslien Charles

Our guest Janet Skeslien Charles really enjoyed meeting our members and she would like to share her favorite locations in Paris with all AFW members.

Merci beaucoup for a wonderful event! It was lovely to see the smiling faces during the interview. I'm so glad that people were interested in the story of the courageous librarians.

I mentioned my neighborhood in Paris and showed it on the map. Here is a little bit about it:

For the over twenty years, I’ve lived in the 12th arrondissement, which is the greenest of Paris thanks to the Promenade Plantée and the Bois de Vincennes. If you love green spaces as much as I do, I hope that you'll visit.

Le parc de Bercy is situated on the site of former wine warehouses, and it retains reminders of its past, such as a small vineyard and old railway tracks. Now in different areas of the park, you can find everything from fragrant roses to vegetable gardens maintained by local schoolchildren to modern sculptures.

The Passerelle Simone de Beauvoir footbridge, one of the newest bridges in Paris, leads from the park to the Bibliothèque Nationale de France.

Bercy Village is an area whose wine cellars used to hold the barrels of what was once a wine market. Now, completely renovated, these cellars from the XIXth century contain shops and restaurants. I appreciate how France is able to take the old and make it new, and wish we had that same foresight in the States.

La Cinémathèque française, whose building was designed by American architect Frank Gehry, has a lovely library and a cozy café.

True confession: Zendo is my favorite neighborhood restaurant, though it is Japanese, not French. Vive la différence !

Thank you again for a wonderful event!

Best wishes,
Janet
-----------
If you have missed our event about the Paris Library with our guest Janet Skeslien Charles, you can watch the recording here: