IMPORTANT - ALL OUR OPERATIONS ARE CURRENTLY RUNNING REMOTELY 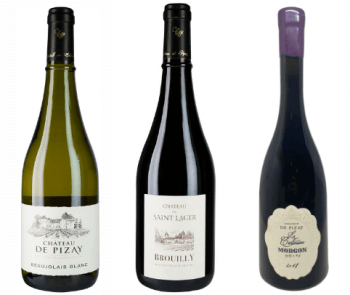 As this event is taking place online via Zoom, you must RSVP in advance in order to get the access link. Attending this event is free, however you will need to purchase your wine tasting pack directly from Zachys.

Please note: for home deliveries, packs must be ordered by February 19th at the latest.

Once again, the Alliance Française of Westchester is partnering with Zachys in order to give wine lovers the exclusive opportunity to taste three wonderful vintages.

An evening with Pascal Dufaitre

A native of Brouilly, Pascal has been Director and Winemaker at Château de Pizay for 38 years.

His incredible knowledge of all things Beaujolais comes from growing up in the vines of Brouilly but also his time as Mayor of the town and, of course, his years managing the estate at Pizay.

The oldest records date to 1030, when the name Pizay was mentioned for the first time in the charters of the Abbey of Cluny. In 1070, a surrounding wall was erected by the Lords of Pizay. The keep was built in the 14th Century and the classic formal gardens were added in the 18th Century.

While it is still the center of winemaking, the main Château is now a luxurious 4-star Hotel, with an excellent restaurant. Visitors are able to visit the magnificent old cellars that have hosted many famous banquets. The Château and grounds are beautifully maintained including a sculpted topiary garden. A fantastic estate for wine, food and relaxation.

The vineyard, based in Morgon covers 100 acres in the Appellations of Morgon, Regnie, and Beaujolais Villages. The terrain is granite, covered with a light sandy soil, ideal for the Gamay grape.

Winemaking combines tradition with the use of stainless steel, semi carbonic fermentation and modern temperature control methods to ensure preservation of the fruit and freshness in the wines.

Since 1996 they have maintained 5 hectare of Organic vineyards and in 2015 they achieved level 3 "High Environmental Value" Certification. The entire estate is now in conversion to Organic.

The Barony of Saint-Lager had its origins in 1432, when the Lhaye family acquired a provostship that had belonged to the Sires of Beaujeu. The château itself dates from 1340. The estate covered the entire east face of Mont Brouilly. The chapel on the peak of the hill was built to protect the vines on lands belonging to Château de Saint-Lager in 1857. The last plots from this very old estate were purchased by Château de Pizay in 1998.

The vines for our Château de Saint-Lager Brouilly are at the foot of the hill and grow in sandy-loam soil that gives the wine intense mellow fruitiness, and a supple elegant mouthfeel, bringing you the charm of a seductive and youthful wine.

The vines for our Château de Saint-Lager Brouilly are at the foot of the hill and grow in sandy-loam soil that gives the wine intense mellow fruitiness, and a supple elegant mouthfeel, bringing you the charm of a seductive and youthful wine.

As an appellation, Beaujolais Blanc makes up less than 5% of total Beaujolais production. Estates often tended a reserve vineyard planted with Chardonnay, the product of which adorned the high table.

A rare treasure in the Beaujolais region, of singular grace and charm; Beaujolais Blanc could be seen as the hidden face of the Pizay vineyard, the Château’s pearl. So unexpected are its shimmering robe and scents, that any encounter with this wine means love at first sip.

A very special barrel aged bottling. The vines were planted in 1915 during World War I by the women of the estate while the men were enlisted in the war.

The 104 year old vines combine with the time in barrel to produce a deep, robust wine. It is sensual and lush. A wine to respect and savor.

Watch this video for a quick tour to the Château de Pizay:

Sorry, you've missed the RSVP deadline for this event.